× This article was published on April 7, 2005 and may contain information that has since changed or become out-of-date.
Please be mindful when reading, commenting on, or sharing this article.

I’ve been meaning to do this for a while, but haven’t gotten around to it. Naruto is an anime and manga series conceived by Masashi Kishimoto focused around a young up and coming ninja struggling to be recognized. It’s a pretty cool series that has lots of potential.

Basically, Naruto follows an air-headed, energetic, loud-mouthed ninja-in-training. The series starts off with him graduating from the Ninja Academy in the Village Hidden in the Leaves. The hyperactive blond is paired with the boy-obsessive Sakura and the secluded Sasuke under the watchful eye of the apathetic Kakashi as the newly formed Team Seven.

I’ll pick off the three main characters and give a brief explanation on them.

Naruto is dead set on showing everyone he can be the best ninja there is -even if there’s a prank or two involved. His yearning for attention stems from the fact that the villagers have shunned him from a young age. A violent nine-tailed fox demon is sealed deep inside Naruto making him an outcast amongst others. However, Naruto learns that others do put aside this stigma and work to teach him teamwork and friendship as he continues his journey. 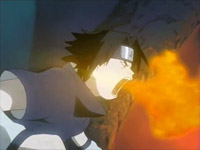 Sasuke leads a mysterious life which is dictated by his past and lives only for revenge as a result. At first Sasuke was not interested in being teamed up with Naruto since he considered him a loser until orange jacketed ninja saved him from a potentially fatal fight. Sasuke is an exceptionally strong fighter, trained in his clan’s ability to use fire and is not to be underestimated in battle.

Sakura is a smart girl with excellent control and an insatiable thirst for Sasuke, even though he blows her off. Sakura is good at controlling her chakra, but demonstrates an understanding in basic ninja skills. Sakura is known for one of her physical traits: an over sized forehead which garners many jokes, even from her closest friends. 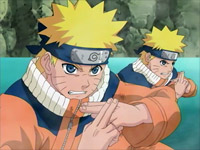 The artwork is outstanding. I love the details and designs used by Kishimoto. The story takes place in Japan, but features some modernistic styles along with contemporary Japanese architecture. Each character has their own unique look and feel. Naruto pretty much appears out of place because of his bright orange outfit. We’re all used to seeing ninjas as completely clad in black, silent and deadly, but Naruto and his teammates changes all that. Some of the designs are catchy such as Sasuke’s exam outfit (all black with white bandages) or Rock Lee’s green jumpsuit and 1970’s orange leg warmers. However, the classic ninja conception makes cameo appearances later on as the elite ANBU squad (sort of the CIA of the series).

I’ve been following Naruto since early 2005, a late start. Currently I’m watching the anime and reading the manga so it’s like a running parallel. There isn’t much deviation between the two, except that the anime has fillers. Lots of fillers, which is unfortunate since they were used to help keep new episodes from airing along with new chapter releases in Japan. All in all, it has room to grow and as the story expands, new situations arise and challenge Naruto.