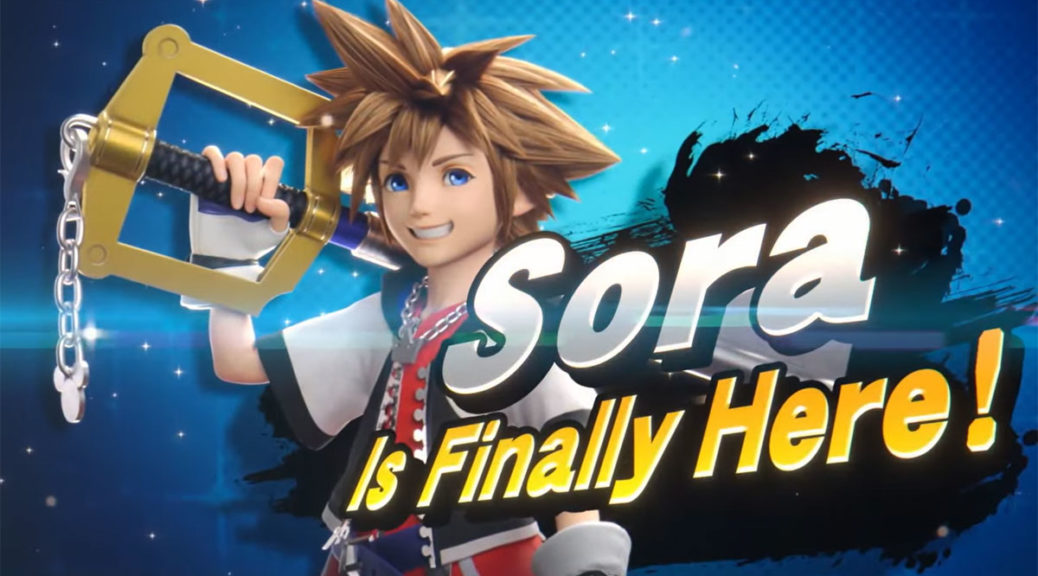 The absolute final character to appear in Super Smash Bros. Ultimate is arguably one of the most requested. Sora, hero of the Kingdom Hearts franchise, is now a member of an all-star roster for the Nintendo Switch fighting title.

This morning, game director Masahiro Sakurai, held his last video to introduce Sora (who, as Sakurai pointed out, shares the same name as the company – Sora Ltd. – that developed Super Smash Bros. Ultimate) as a playable character.

Replicating his moves from the Kingdom Hearts games, the spikey-haired Sora carries the emblematic Kingdom Key Keyblade, can cast the elemental spells Blizzaga, Firaga and Thundaga, and glide across the battlefield. His Final Smash, Sealing the Keyhole, sends opponents into an alternate realm as Sora raises the Keyblade to slam the door and lock them away for considerable damage.

Accompanying Sora is his own level, the distorted, pulsating exterior of Hollow Bastion, in which platforms will travel throughout the massive fortress before winding up in the darkness of Dive to the Heart, the depths of Sora’s own heart.

In the video, Sakurai recalls the online form used to solicit fan ideas on future roles; Sora consistently appeared in the requests. However due to the complexity (Disney is fiercely protective of its intellectual properties), it took a while for Sakurai and his crew to craft Sora’s addition to the game. Likely at Disney’s own wishes, Sora’s sidekicks Donald and Goofy don’t make an appearance; neither does Mickey. This is evidenced by the hallmark stained glass scenes featured throughout the series, inlayed with designs of the Square Enix-conceived characters, but none of the Disney ensemble, locales or musical themes. No need to worry if Donald will appear to heal (or not) the Keyblade carrying fighter when his health is in danger. The good news is that players can recreate one of the many Sora versus Cloud versus Sephiroth battles…

Tetsuya Nomura, director for the Kingdom Hearts games, shared his appreciation of Sakurai and his staff for their efforts in bringing Sora to Super Smash Bros. Ultimate by way of Twitter.

Kingdom Hearts, which celebrates its 20th anniversary next year, is a series of over a dozen video games that blends Square Enix characters with a legendary cast from Disney films that first appeared on the PlayStation 2 in 2002.