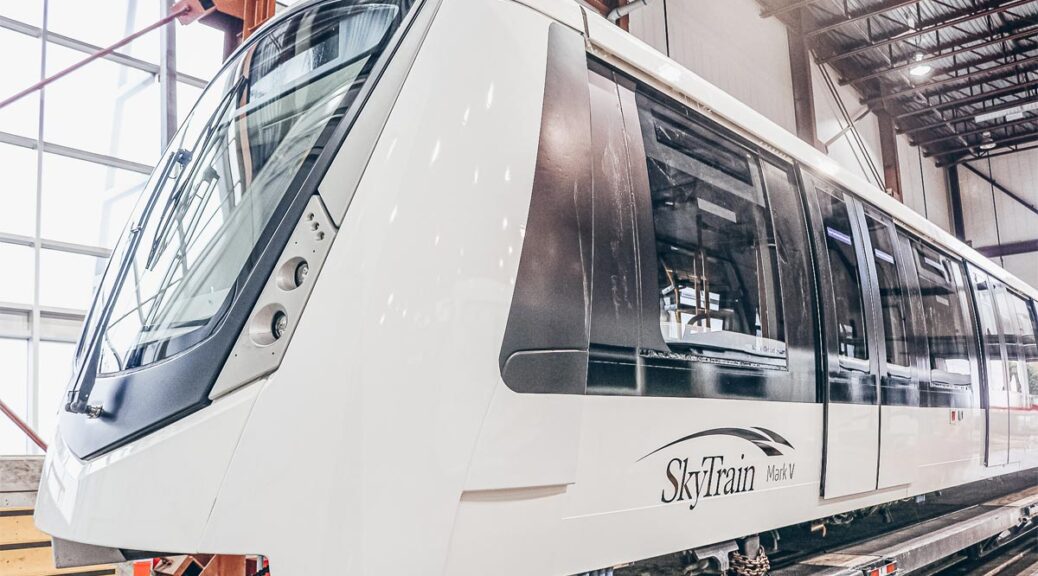 This week, TransLink has received a full-scale demo of the new Mark V SkyTrain vehicle (pictured above) from the manufacturer, Alstom. The new trainsets are being built to handle future capacity on the SkyTrain’s Expo and Millennium Lines and to replace the original Mark I cars from the 1980s and 1990s.

Alstom, which purchased Bombardier Transportation in January 2021, delivered the single car body, minus the bogeys (trucks) and undercarriage, to the transit agency so they and the media could have an opportunity for a look at the interior and some of the cool new features planned for the fleet.

Back in 2019, TransLink solicited customer feedback on the next generation of rolling stock and took the input to the manufacturer to craft a prototype. While the exterior resembles that of the existing Mark III trains riding the rails right now with the larger windows, and six doors per car (three on each side), the interior has some notable changes.

This prototype is not the final design as Alstom will implement changes based on feedback from TransLink.

Five permanently coupled cars will make up the Mark V trainsets, the first of which is expected for delivery in 2023, with the last trainset planned to arrive in 2027. TransLink placed the $722.6 million CAD order with Bombardier Transportation in 2020 for 205 cars for 41 trainsets in total.

A number of stations will need to undergo platform extensions to handle the longer five-car Mark V trainsets. TransLink has also acquired property north of Braid Station to build a new maintenance and storage facility named OMC4 — OMC1 is the original facility south of Edmonds Station in Burnaby, OMC2 is the structure that built the Mark II vehicles and the site of the new data centre across from OMC1, and OMC3 is the small maintenance yard between Inlet Centre and Coquitlam Central stations.

Extensions to the SkyTrain network are ongoing, with additions to the Expo Line along Fraser Highway in Surrey to Langley, and the Broadway Subway portion of the Millennium Line in Vancouver.