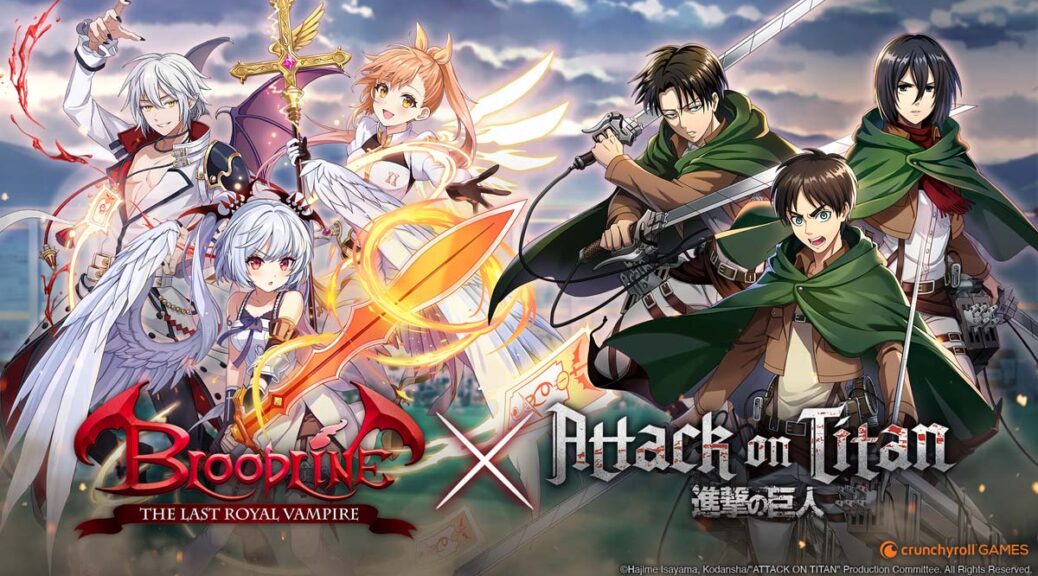 Coming this summer from Crunchyroll Games and Shanda Shengqu Games is Bloodline: The Last Royal Vampire — a new mobile JRPG adapted from the popular Chinese graphic novel series Bloodline. As part of the lead up to the launch, for a limited time, is a special event with characters from Attack on Titan.

Fans globally outside of Asia can pre-register for Bloodline: The Last Royal Vampire, which launches later this summer, to play on Android or Apple iOS devices. A specific date for launch was not provided.

Lilo is the last of the Royal Vampires, and is under threat from the evils of the invading Holy Land. Together with her friend Ren, Lilo must fight back Holy Land and protect those close to her in this battle where virtue triumphs over darkness.

With the Attack on Titan collaboration, Eren Jaeger, Mikasa Ackerman and Levi join the fight against Holy Land with special levels, items, rewards and power ups for player profiles.

“Bloodline is an exciting story pitting good vs. evil in an epic battle for survival that makes for an exciting mobile game. We can’t wait to unleash the action on players. We are deeply humbled to work with Shanda Shengqu Games and Kodansha to bring Attack on Titan characters into the Bloodline world and create a truly epic launch experience for fans. We know the massive cast of characters, deep story and endless gameplay will keep fans coming back for more.”

Bloodline: The Last Royal Vampire is a classic tactical turn-based card game with over 400 available characters to call upon — from sword-wielding knights to minigun-toting waifus and everything in between, each players’ team is unique. Features like Auto Battle, Raid and Auto Mine makes the game do all the hard work while the player can focus more on their own character developments and progression. Play against friends and other guilds with real-time Guild Battles, or go head-to-head with all out brawls in Arena, Tower of Fate or Giant Guild Battle modes.

Created by Hajime Isayama, Attack on Titan is set in a world where massive human-like creatures called titans feed off of humans. Seemingly protected by similarly sized walls, what’s left of humanity struggles to survive while under threat by these titans with Eren, Mikasa and Levi searching for the source of the titans and how to defeat them once and for all. The anime adaptation of Attack on Titan is available for streaming on Crunchyroll.